“The BMW Shorties has coursed a remarkable distance since it first undertook the noble task of providing a platform for aspiring Malaysian film enthusiasts to realize their potential. As a premium brand which understands the importance of cultural pursuits like filmmaking to a generation, the BMW Group is extremely humbled by the response we have recorded and the impact we have rendered in the local film industry through the BMW Shorties. Having received over 600 short film entries and launched countless film talent into full-fledged careers, the BMW Shorties is honoured to have helped Malaysia built a bold legacy in filmmaking,” said Mr Han San Yung, Managing Director and CEO of BMW Group Malaysia.

Returning for the tenth year, the prominent short film competition is appropriately themed “Journey” to commemorate its decade-long milestone. The theme aims to encourage aspiring film makers to expound on and communicate the importance of a journey in the establishment of legacies in life.

“The significance of a journey in the pursuit of legacy and ambition cannot be appreciated enough as it is the journey which shapes our identity. Similar to how the BMW Group is celebrating its 100 years of success in premium mobility, the BMW Shorties is also charting its decade-long milestone in fortifying the local filmmaking industry. With the theme “Journey”, we want aspiring film makers to recognize and internalize the significance of the journey not only in their short film creations but also in their own pursuit of a filmmaking career,” said Han

Judging this year’s competition is a line-up of Malaysia’s top film making virtuosos which comprises six-time BMW Shorties veteran and commercial film maker Lina Tan; award-winning Malaysian film maker, Liew Seng Tat; and up and coming film maker and screenwriter, Nadira Ilana. To mark the tenth edition of the BMW Shorties, the short film competition will also be judged by guest judges including renowned film editor and sound editor, Lee Chatametikool from Thailand as well as Yuni Hadi from Singapore, a refined film producer, author and curator specializing in the management of film and media projects.

As before, the BMW Shorties short film competition will be offering aspiring film makers the opportunity to win the grand prize of a RM 75,000 production grant alongside promising prospects in the filmmaking industry. Other accolades for filmmaking potential include Best Director, Best Actor, Best Actress, Best Screenplay, Best Cinematography, Best Production Design, Best Editing and Best Sound Design as well as the ever popular People’s Choice Award. 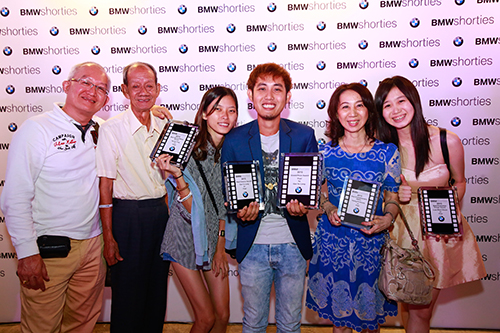